www.jupiter-ace.co.uk
Previous Page > Programming Index > Read all about it!
Read All About it!
AceFORTH allows you to enter information from the keyboard using INKEY, QUERY and RETYPE. The INKEY word is the easiest to use as it reads the keyboard and leaves its ASCII code on the stack, but if you are pressing several keys it leaves 0 on the stack. There are many ways of using the INKEY word to test for keys pressed, but its only good for reading one character at a time.
QUERY and RETYPE use the input buffer. QUERY clears the input buffer and then lets you enter characters. RETYTE keeps the characters in the input buffer which gives you a chance to edit them. More information on these words can be found in the user manual, with the examples. These AceFORTH words are useful but for but for some applications - for example, when combinations of keys must be read simultaneously - the IN function can be used to read the keyboard directly.
The keys on the Jupiter Ace are connected to the Z80 microprocessor through input/output ports. There are 65536 input/output ports, and each one can be addressed individually. In the same way that @ and ! are used to read or write to memory, IN and OUT are used to read and write to input/output ports.
The word IN ( add - c) will take a port address from the top of the stack (ToS) and return the value of a port to the ToS, 65278 IN would result with a value from port 65278 on the ToS. while the forth word OUT ( c add -) will write the value c to port add from the stack, 20 65278 OUT will remove 20 and 65278 from the stack and output the value 20 to port 65278.

The keyboard consists of four rows of 10 keys, each row being divided into two half-rows of five keys. Each half-row maps onto a port as shown in the image below, port addresses in blue.

Notice that the keys in the left-hand half-rows map to their ports from right to left, but that the right-hand half-rows map left to right. The rightmost five bits of a port each map onto a key, and will take the value 0 if the corresponding key is pressed, or 1 if it is not.

The bits marked X are unspecified (in yellow in the image) - they can hold either a one or a zero. This means that the value of left on the stack will be undefined. This problem can be overcome by setting the value of the top three bits to zero in software by using 31 AND.

Please note: That on the Ace keyboard the Symbol shift key is next to the SPACE key the above image is an address port map of where the key ports are mapped. 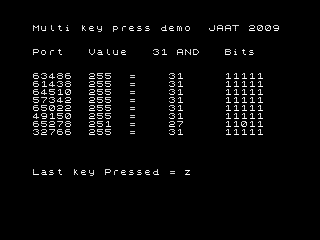 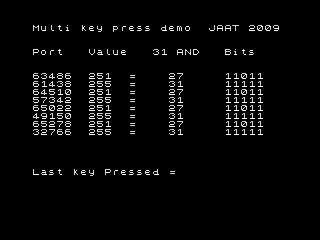 In the above screen shot a single z key has been pressed, in the second screen shot keys 3,e,d and z are being pressed simultaneously.
There is also a routine that Garry Knight uses in his ALIENS game ( which is MIA). Garry's routine uses machine code and details can be found in Ace User Issue 3, page 12