This page is currently a WIP

I would like to start by thanking the following people Dr. Stuart Leask, Jeff Shepherd, Martyn Davies, Edwin Blink (in the Netherlands), Simon Owen, Ricardo Lopes (in Brazil) and Sergio Gimenez (in Spain). Without these people, the following information would have been lost and a part of the Jupiter ACE history, thank you to you all.

Deep Thought how it was found?

How Deep Thought was found is a story in itself. Quite by chance, five Jupiter ACE tapes were found with a job lot of Spectrum software. The purchaser (thanks to Dean Lowery) contacted our archive to check if the titles were preserved. All these tapes were unknown titles from 'Waylandsoft', 'Stusoft', 'Colinsoft' and 'Shepherdsoft'. After some checking we found a document in our archive from Martyn Davies on behalf of 'Waylandsoft' at the time this was the only document we had in the archive about 'Waylandsoft'. We had no other contacts and could not find anything else out about these tapes. So, we archive the tapes, scanned the tape inlays and put them on the website.

The tapes in the archive with inlay scans and were seen by Dr Stuart Leask. Stuart's nostalgic memories prompted him to email the archive confirming that he and his friends, Martyn Davies, Jeff Shepherd wrote and sold some ACE programs '83 - '85. His email described a few game titles and utilities and a truly superb DOS by Jeff (called 'Deep Thought'). Stuart goes on to recall how 'DT' need a serial to parallel converter and some TTL logic chips , and plugged straight into a Shugart- interfaced 5.25" floppy drive, giving 70k of storage per disk.


'Martyn & I dropped in on Boldfield as they had a little shop on the outskirts of Cambridge. A little man with a moustache and a sports jacket in a tiny shop-front with almost nothing in it. But we were put off by their relatively high prices. They too did a disk interface, which used a standard WD chip. However, they wanted about 100 UK pounds for it, cheap for a disk interface in those days, yes, but far more than our student grants would stretch to!'


I thought we had found the 'Jet disc system from MPE' and the DOS was called 'Deep Thought', Stuart soon corrected my confusion, which turned to excitement with the prospect of a new bit of ACE hardware a Disk Drive system called 'Deep Thought' , well it was created in the mid '80s (THGTTU). The drive system Boldfield were selling must have been the Jet Disk system.


Stuart managed to retrieve his very heavily modified Jupiter ACE with 'Deep Thought' from storage, after it dried out, the ACE did power up. The ACE with Deep Thought did read some floppies but due to a damaged drive, it also corrupted some floppy disks. I eventually when to visit Stuart to loan his Jupiter ACE to document, photograph, archive the ROMs and floppy disks. The system is so heavily modified and age has taken it toll with the RAM not working and power issues, but we did get the ROM images. 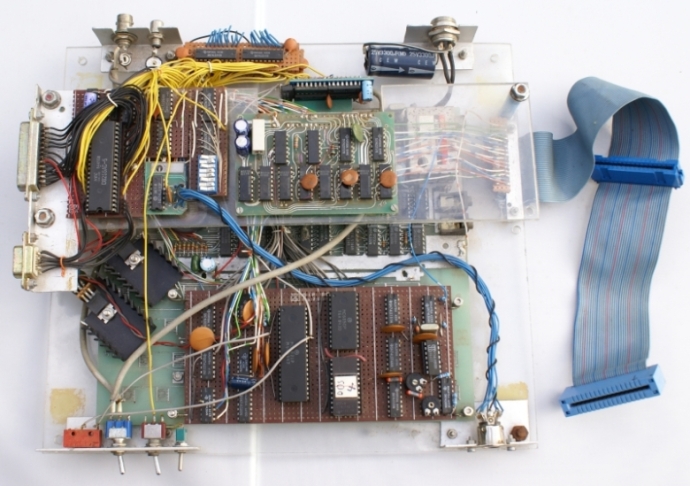 This image is looking down at Stuart Leask's heavily modified Jupiter Ace.
The are many additions to the ACE, the Deep Thought disc board which can be seen clearly,
its the brown vero-board pcb which sits over where the rubber keyboard mat would be.

What is Deep Thought

'Deep Thought' is a disk drive interface for the Jupiter ACE. The board uses 12 IC chips but no disk drive interface chip which was expensive. A 4K ROM onboard contained the DOS written by Jeff Shepherd - See here for the DOS ROM diss-assembly. The Jupiter ACE's ROM had to be patched to accommodate the new DOS commands, which is explained in more detail see How it works. Deep Thought design was cleverly adopted from the Junior microcomputer featured in Elektor electronics magazine. The DT board will only work with 5.25" drives due to the way it works, it needs to detect the index hole on the floppy disk, and formats the disks with soft sectors giving 70K per disk. 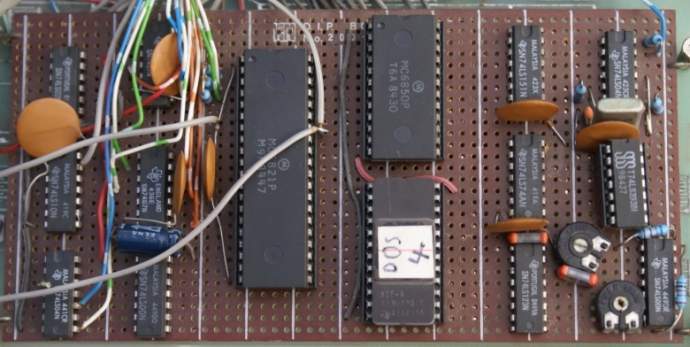 Close up of the board the chip with the sticker "DOS 4" is the 4k EPROM containing the DOS.

Underside of the board.

Deep Thought was based on the 'Floppy disk interface for the Junior' (PDF of article) published in Elektor November 1982. But its worth reproducing some of the information from Elektor in this section about Deep Thought we will start with the floppy disk its self.


Each floppy disk drive has a door at the front. This door must be opened to insert or remove a disk. The door should not be closed until the disk by been fully inserted into the drive. Otherwise there is risk of damaging the diskette. Fitted to the door of the drive is a switch which closes a contact when the door is closed.Thus the computer can only, write data onto the diskette or read data from it when the door is closed.

Diskettes can the protected against accidental overwriting. As can be seen in the image below, there is a notch in one aide of the diskette. An optoelectronic device in the floppy disk drives monitors this notch to establish whether it is open on covered. It the notch is covered the disk... is protected against accidental overwriting. It the programmer attempts no Write data onto a write protected diskette the DOS issues an error message.

The drive chassis also contains three other electromechanical components: As its name implies, the task of the head-load solenoid is to lower the read/ write head onto she magnetic surface If the diskette. If the head-load solenoid is no activated, the read/write head is raised from he surface of the diskette by a spring. On a BASF drive the head is rigidly mounted. A felt pressure disk presses the magnetic surface of the diskette against the heed.

Deep Thought has a 4k EPROM (2716) which holds the DOS commands. The command are written in a mix of FORTH and some Z80 machine code. The EPROM is mapped to address F000hex (61440 dec) and we have called it the DOS ROM to distinguish from the ACE's Standard 8K ROM.

The problem is how do you get the the DOS ROM to work with the standard ACE's ROM?
Forth is a threaded language so a link must be made some how between the ACE's ROM and Deep Thoughts DOS ROM. In FORTH each word is linked to its previous defined word in its dictionary. The solution was to patch the ACE's standard ROM.

The image above is a comparison of the Standard ACE's ROM (left) and the Deep Thought ROM (right). The bytes that are different are in red, so looking at the Deep Thought patched ROM (right), hex C3 15 F8 is a Jump to location 63509. This location is in the DOS ROM and is the setup routine for the Deep Thought PIA and MC6850 Asynchronous Communications Interface Adapter(ACIA) chips. The next change is to the FORTH word QUIT, it is the first word defined in the standard ROM, so its link field value is is 0000, but in the Deep Thought patched ROM QUIT is linked the the DOS word DLOAD (Hex FF FD). Which means is the ACES ROM when searching for a word will search the DOS ROM then the ACES ROM. 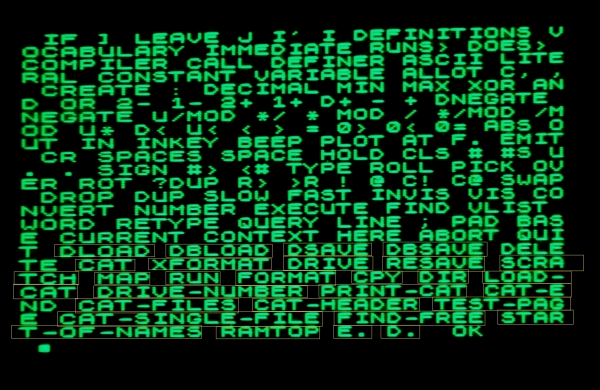 The image above is a word list (VLIST) of the known words in a Deep Thought system, you can just make out the DOS words I have highlighted them with a yellow box or be it not very well!

We have named the 8K patched Jupiter ACE ROM the 'Deep Thought BOOT ROM', and the 4k ROM with the DOS, the DOS ROM. They are available from the ROM download page.

Recovering Data from the floppies - WIP

How the Data from the floppies was recovered. ** wip ** 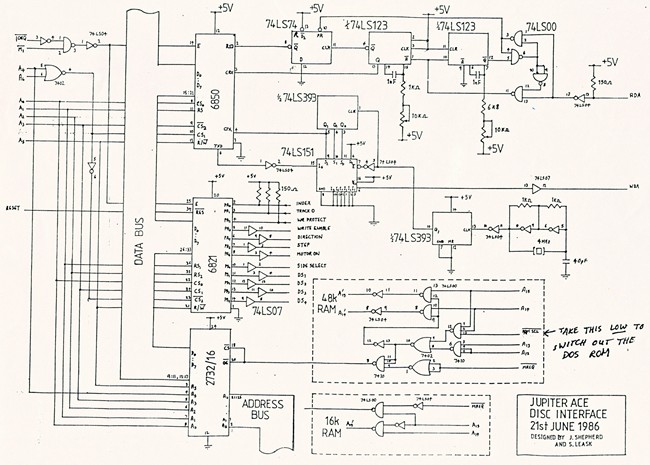